– The Government now expects the Federal budget deficit to peak at a record $213.7bn this financial year. That’s around 11% of GDP, its highest since the end of WW2. The risk is the deficit will be worse at around $230bn.

– Providing more stimulus & holding off on budget repair are the right thing to do. But it will be a long hard slog to get the deficit back down and stabilise public debt.

The 2020-21 budget is a long way from the 2019-20 “back in black and back on track” budget. Last year, it was all about delivering the long-awaited budget surplus. This year it’s all about spurring recovery. So, the focus is on providing more stimulus to boost demand and in the process get unemployment back down to acceptable levels. As such, the projected budget deficit has blown out to a record $213.7bn and while it should fall from next year as emergency programs come to an end, the Government won’t shift the focus to budget repair until the unemployment rate is comfortably below 6%, which is likely to be at least three years away, and even then, a return to surplus is likely at least a decade away.

The key fiscal measures are:

There was little in the way of economic reform in this budget although some red tape will be removed for businesses.
The additional $83bn in stimulus measures since the July Economic and Fiscal Update takes total direct coronavirus support to $257bn. Along with loans & guarantees total Government and RBA support is now worth $507bn or 25% of GDP, spread over 5 years.

The Government is forecasting the economy to contract this financial year by -1.5%. But this masks a “record” -7% contraction in June quarter GDP and a gradual recovery from the second half of this year. The Government is a bit more optimistic than we are in terms of economic growth and unemployment. A big factor constraining growth is that net immigration is expected to be negative resulting in population growth of just 0.2%, the lowest since 1917.

The Government’s revised budget projections are shown in the next table. The hit to the economy and hence revenue and expenditure since the Mid-Year Economic and Fiscal Outlook last December is now estimated to be $59.9bn for this financial year and is shown in the line called “parameter changes”. This has actually been revised down from $72bn in the July Update reflecting stronger growth forecasts but is now expected to worsen over time reflecting much slower wage and population growth. Policy stimulus (mainly due to coronavirus) since last December is shown in the line labelled “Total stimulus”. It’s now running at $159.8bn for this year, up by another $41.4bn since July which is more than we were assuming. As a result of the fiscal response and the hit to revenue from the downturn, the Government projects the budget deficit to blow out from $85bn in 2019-20 to a record $213bn this financial year. At 11% of GDP, this will be the highest since WW2.

Over the forward estimates to 2023-24 the deficit is projected to fall rapidly as temporary support programs phase down. As can be seen in the next chart Government support programs have blown spending as a share of GDP out to 35% from 25%. 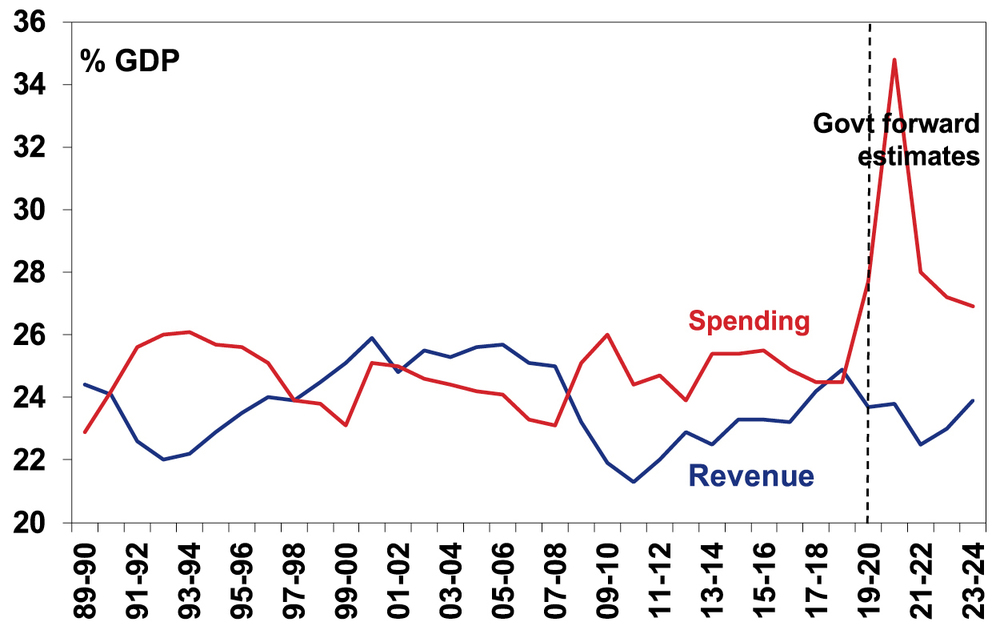 But with the economy smaller than previously expected, not helped by the hit to net immigration (which is now estimated to be -72,000 persons this year from a norm in recent years of 240,000), it’s going to be a long hard slog back to surplus. The next two charts show the Government’s budget deficit and debt projections out to 2031 and show the budget remaining in deficit. Even if the post GFC “budget repair” experience is replicated, budget balance is unlikely until around 2032 and that is optimistic, as the GFC did less damage to the budget. 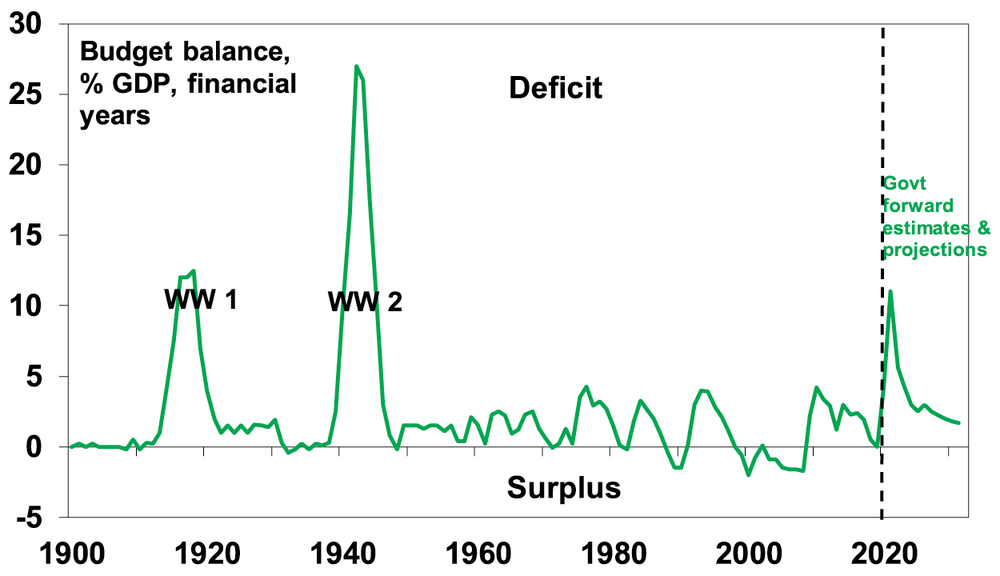 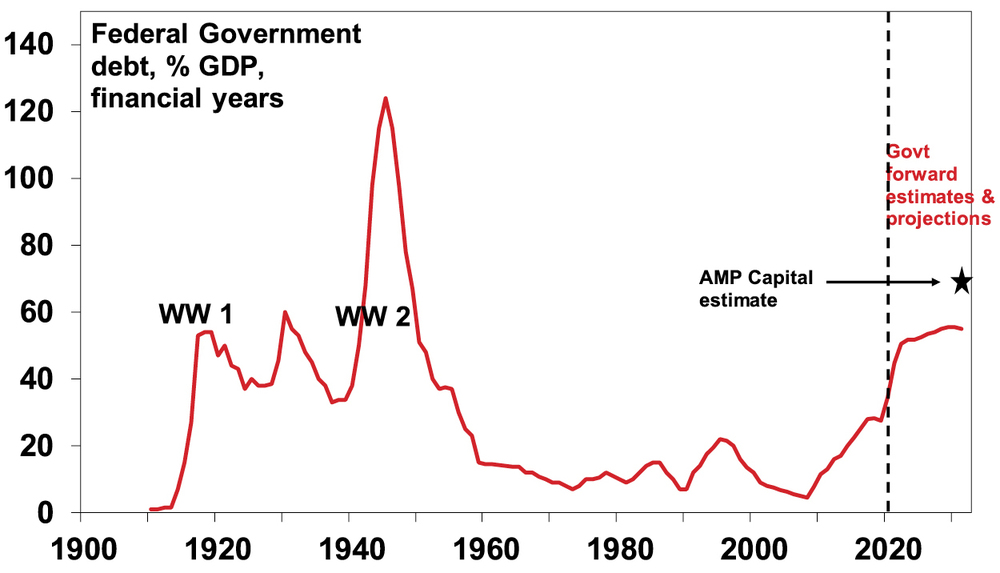 Federal debt as a share of GDP is already at its highest since the 1950s. While productivity enhancing reforms will help grow the economy its unlikely to be anywhere near enough to achieve anything like the rapid post WW2 decline seen in the debt to GDP ratio. In fact, in our view the debt to GDP ratio is likely to continue to rise in the years ahead and is likely headed to around 70% of GDP early next decade or nearly $2 trillion.

The latest stimulus takes Australia’s total level of coronavirus related fiscal stimulus this year up to 10% of GDP, which is at the high end of comparable countries. This along with ongoing stimulus into next year should aid the economic recovery. However, a test lies ahead as direct income support and the bank payment holiday taper and it’s questionable whether the extra stimulus in the Budget will be enough, given the long tail of unemployment and underemployment. Hence, we still see the risk of a slight further deterioration in deficit projections.

More broadly, our assessment remains that the blow out in the budget deficit is appropriate and affordable. First, it’s absolutely necessary, without the stimulus the short term hit to businesses, jobs and incomes and the long-term scarring would have been far greater and the recovery a lot slower.

Second, while much of the economy has reopened, big parts of it (like parts of education, travel and retailing) have not and will take much longer to recover. Hence the need for ongoing government help in providing stimulus and jobs.

Fourth, while some of the brought forward income tax cuts will be saved, they see a bigger percentage income boost to low and middle income earners who save less than high income earners, also being permanent are more likely to be spent than a once off payment & they are part of a package of measures.

Fifth, Australia’s starting point for net public debt last year was low at 23% of GDP compared with other advanced countries averaging 83%. And even with projected budget deficits it will remain relatively small.

Sixth, borrowing to finance the budget deficit is in Australian dollars and we are not dependent on foreign creditors, so we are not vulnerable to a “foreign currency crisis.”

Finally, the cost of Government borrowing is very low at around 0.85% for ten years and 0.25% for three years.

Cash and term deposits – with the cash rate likely fall to 0.1%, cash & bank deposit returns will remain low for a long time.

Bonds – the surge in public debt would all other things being equal, point to higher bond yields, but this is offset by massive spare capacity, low private sector borrowing and low inflation, so it’s hard to see a lot of upside in bonds yields. If coronavirus comes under control, it’s hard to see much downside either, so medium-term bond returns are likely to be low.

Shares – the ongoing addition of stimulus will further aid the recovery, at the same time that interest rates are very low, all of which is supportive of shares.

Property – high unemployment, the phasing down of income support and the hit to immigration still point to more downside in prices in Melbourne and Sydney, but continuing government property support measures will offset – particularly in houses, outer suburbs and cities less impacted by immigration.

The $A – ongoing fiscal stimulus at the high end of comparable countries coming at a time of rising commodity prices and a declining US dollar point to more upside for the $A.