The table below provides details of the movement in average investment returns from various asset classes for the period up to 31 December 2020.

As the year came to an end, the momentum of the positive vaccine news along with the Santa rally (a reference to positive market returns from mid-December to January) has shown a bullish market sentiment and reflects investor optimism for a strong economic recovery in 2021.

Economic conditions in Australia remain positive with a faster than expected rebound due to significant fiscal stimulus and quantitative easing (QE.). This resulted in retail sales increasing by 13% year-on-year and business confidence reached its highest level since 2018. 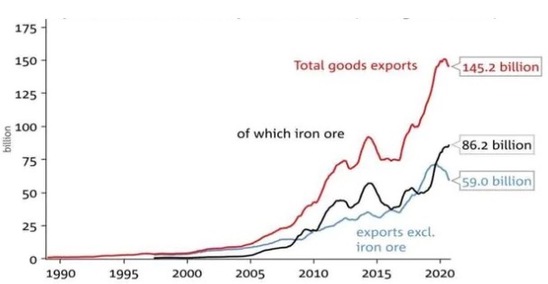 Chinese iron ore exports, which now account for approximately 4% of GDP, remain strong despite the bans on coal and agricultural products. It is highly unlikely that this would escalate into iron ore bans as forecast Chinese demand has increased by 4.5% in December and with supply constraints in Brazil, it would be difficult to find an alternative supply given Australia accounts for 50% of global iron ore exports.

Chinese data continues to provide an expansionary outlook with increases in industrial production and retail sales helped along by stimulus measures. China’s central bank has implied a moderate credit growth rate which has assured investors of the limited downside in risk assets which has kept the growth momentum of Chinese equities (+2.2%) through to the end of the year despite the setbacks imposed by Trump on Chinese stocks as well as the Chinese clampdown on Alibaba and the Ant IPO.

The EU successfully agreed upon a 1.8tn EUR financial support package and a provisional Brexit deal which has lifted investor sentiment and allowed for a more positive start to the new year as major trading disruptions were avoided in first days of 2021. Economic conditions continue to improve as composite PMI, a measure of future economic activity in manufacturing and services, increased to 49.1 with the services sector remaining a major drag on economic output due to the mobility restrictions and a subdued outlook on tourism for the short term.

Trump signed a US$900bn economic stimulus package which allowed the US to avoid a government shutdown and provides stimulus checks to eligible individuals. It also enhanced unemployment benefits, providing further support to the US economic recovery. Manufacturing PMI increased to 57.1 due to recovering demand for goods and lower sensitivity to social distancing, but services PMI decreased to 54.8 amid growing cases of coronavirus.

Despite a global recession in 2020 due to the coronavirus stock markets still saw positive returns over the year with some overseas share markets above pre-Covid levels. The S&P500 and Emerging markets were up 18.4% and 7.8% respectively over the year. Continued vaccine rollouts, a low interest rate environment and unprecedented global wage and other income support allowed economies to recover faster than anticipated. Investor sentiment toward risk assets is likely to be positive but still at risk as income support is gradually withdrawn throughout 2021.

Global stimulus in response to Covid-19 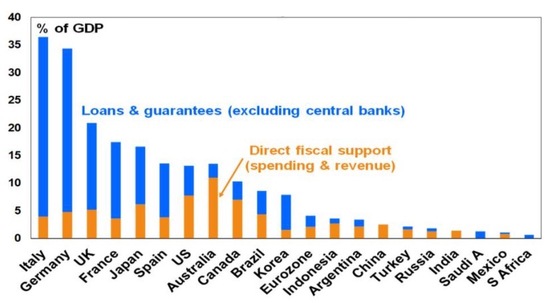 The Australian stock market (+1.2%) posted positive gains in December with. Info Tech (+9.5%) a leading contributor. The RBA governor announced that ‘Buy Now Pay Later’ providers will be able to insist merchants not pass costs onto customers in the medium term which saw Afterpay (+20.0%) soar through December to new record highs. Materials (+8.8%) and Resources (+8.5%) also lead the market as the market continued to price in recovery which drove up commodity prices such as iron ore to a peak of US$172 per tonne. This saw BHP (+10.0%) and Fortescue Metals Group (+27.8%) up sharply ending the year on a high.

The S&P/ASX 200 ended the year with forward price-to-earnings (PE) multiple of 19.5x, considerably higher than the 20-year average of 14.3x indicating investor’s confidence in a strong market recovery. The Australian market’s yield has declined to 3.4% well below its 20-year average of 5.6% as a number of companies cut dividends in the face of the economic slowdown. The high PE and low dividend yield indicate that investors should probably expect lower returns and income in the coming years.

International shares (hedged) (+3.6%) finished the year strongly as both the EU and US delivered another round of fiscal stimulus before Christmas. The UK also managed to successfully negotiate its Brexit trade agreement and the passing of these risk events lifted investor sentiment as European (+3.2%), UK (+3.3%) and US (+3.8%) markets all showed positive returns for the month.

Emerging markets (unhedged) (+2.5%) had a strong month in December. This was mainly driven by commodity exporters such as Brazil (+9.3%) and Russia (+5.8%). India (+7.8%) was also a major contributor as foreign institutional investments continued the momentum provided by the vaccine news. Over a 12-month period, China’s early recovery allowed it to outperform all major countries (+23.4%) over the year which led to EM equities outperforming the domestic stock market.

Australian fixed interest (-0.3%) was slightly down as the Australian 10-year bond yield increased by 7bps to 0.97% despite the RBA’s bond purchases, suggesting an improving economic outlook and the potential for rising inflation. International fixed interest (+0.3%) gained despite a rise in US 10-year bond yield (+7bps) to 0.92% driven by improving economic conditions

Australian property (+0.6%) and International property (+2.6%) both underperformed their broader share markets. Over a 12-month period, the property sector was one of the few asset classes to have a negative return (-4% for domestic and -13% for international) due to the impact that Covid-19 had on retail and office as lockdowns forced people to stay at home. Logistics and industrials were key drivers within REIT’s as the shift to online shopping supported these sub sectors.

Key considerations for AREIT’s in 2020 was extreme volatility with a -35.2% return in March which was largely offset by strong gains in April (+13.7%), November (+12.9%) and August (7.9%). In addition, a record $5.6bn of equity was raised (largest amount since the 2009 GFC) to lower debt and facilitate acquisitions which may suggest a consolidation within the sector.