In May, I argued that due to Australia’s far better control of coronavirus relative to many comparable countries, a stronger economic policy support response to shutdowns, and exposure to China which was well into economic recovery Australia was likely to come through this period of global misery relatively well compared to many other countries – and this may ultimately support Australian shares and other assets relative to other comparable countries’ assets. In the interim, the coronavirus resurgence in Victoria got in the way and we are still not out of the woods as periodic problems in NSW and a cluster in South Australia highlight.

But the basic points remain valid and I continue to thank god I live in The Lucky Country. This note provides an update and looks at five reasons why the Australian economy is well placed for a solid recovery in 2021 and why Australian shares are likely to be relative outperformers versus global shares.

Australia’s success in “controlling” coronavirus continues to stand out globally (touch wood). Comparing OECD countries in how they are managing the coronavirus outbreak (based on new cases per capita, deaths per capita, total cases per capita and testing per capita) Australia ranks first, with NZ 2nd (this has been flipping around) compared to the US at 22nd, Sweden at 28th, Spain at 32nd and France at 36th. See the next table.

Less congested living, better weather, a younger population and luck may have all played a role, but the big driver looks to have been a public health response based on expert medical advice as opposed to bravado and crackpot theories. This has been characterised by rigorous contact tracing, quarantining and timely and targeted distancing and containment measures. Our institutions have been working well together across various levels of government – in contrast to the US where President Trump has contradicted and weakened the message. And the overwhelming majority of Australians have done the right thing.

Daily new cases per million people are running at around 0.4 compared to over 400 in the US and deaths are around 36 per million compared to around 700 or more per million in many other major countries. If we had the same deaths per capita as the US, we would have lost an extra 18,000 people to the virus.

Recent news regarding a vaccine is very good with two vaccines (Pfizer and Moderna) showing efficacy of 90% or more in preliminary testing. But there is still a way to go yet – more information regarding efficacy & safety is required & assuming these are positive, it will probably take at least till mid-next year for broad enough coverage to achieve herd immunity (and longer for the whole world). In the meantime, better virus control provides more scope to continue cautiously reopening the economy and confidence for Australians to participate in it.

The global government policy response to the economic threat posed by coronavirus has been huge. See the next chart.

Global stimulus in response to Covid-19 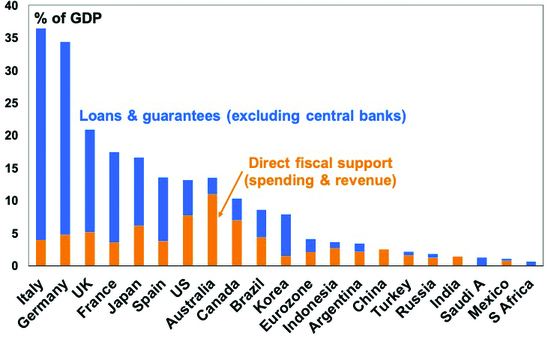 But in terms of direct fiscal support, Australia has stood out with the biggest stimulus at nearly 11% of GDP for 2020 in comparison to other major countries. And it’s been well targeted (with the JobKeeper wage subsidy protecting businesses, jobs and incomes) and with stimulus extended in the October Budget into the years ahead with a bring forward of tax cuts and tax write-offs for investment having the effect of muting much feared fiscal cliffs. RBA monetary easing arguably lagged relative to other countries but has now largely caught up, with a full blown bond buying program.

We are benefitting from our biggest export market – China – having now fully recovered and most of our Asian trading partners similarly doing a better job of controlling coronavirus and hence being better placed to recover. This supports demand for our exports and partly explains why prices for our key exports – notably iron ore – are holding up relatively well.

Fourth, the drag from the mining bust is over

The slump in mining investment from around 2013 that has been a key drag on the Australian economy (detracting around 1.5 percentage points per annum from GDP between 2012-13 and 2018-19) is now over and mining investment is now starting to improve. The ABS’ most recent capital spending survey points to growth in mining investment of between 1% to 8% for this financial year. This partly explains the relative strength of WA economic data recently after years of weakness.

Finally, the relatively cyclical Aust economy and share market should benefit from global recovery in 2021

The Australian economy and share market with their relatively high exposure to resources and financials are relatively cyclical in contrast to the US that has a higher exposure to “growth” sectors like IT and healthcare. Consequently, the US share market and the $US tend to outperform in downturns and underperform in upturns. So if the combination of a vaccine and global stimulus drives a strong global economic recovery in 2021 (mainly in the second half) then the Australian economy, shares and $A are likely to be relative beneficiaries.

Implications for the Australian economy

The combination of better virus control, a superior policy response, exposure to faster recovering China and Asia, the shift in mining investment from being a drag to being a boost to the economy and leverage to a cyclical recovery globally should result in a stronger more assured recovery in the Australian economy relative to comparable countries in the year ahead. This is partly evident in our Economic Activity Trackers which are based on weekly data for things like credit card sales, restaurant bookings, job openings, confidence and mobility. While the Victorian lockdown saw Australia’s Economic Activity Tracker fall back around August, it has recently started to accelerate again & is looking stronger than the US and Europe. 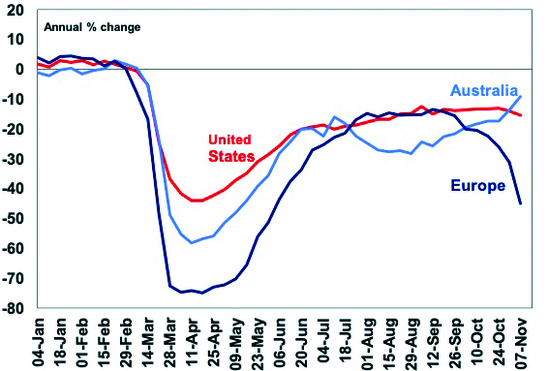 A relatively stronger recovery for the Australian economy should benefit Australian assets relative to global assets. This could continue to come via an appreciation of the $A and we continue to see the $A rising to around $0.80 over the next year or so. However, it’s also likely the relative underperformance of the Australian share market since October 2009 has run its course. The next chart shows the ratio of Australian share prices to global share prices in local currency terms. Over the last 30 years, the relative performance of Australian shares has seen three distinct waves – underperforming through the tech boom until March 2000, outperforming through the resources boom of the 2000s, but underperforming since October 2009 as the mining boom went bust and coronavirus hit cyclical stocks. 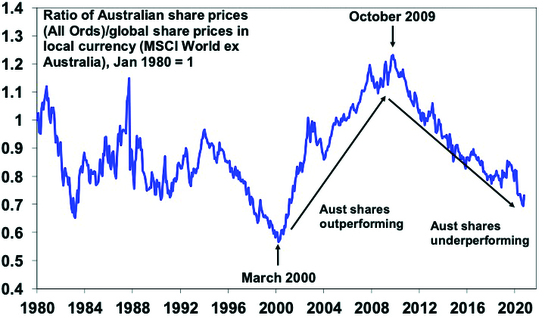 However, there is now good reason to believe that this relative underperformance will start to reverse in the year ahead if the Australian economy recovers faster, cyclical sectors like resources and financials come back into favour over growth stocks like IT and healthcare and as commodity prices continue to drift up. As a result, it’s hard to maintain a strong case against Australian shares in favour of global shares. We expect Australian shares to provide solid returns next year.

There are five main risks or potential threats to this.

First – vaccines could prove ineffective leaving all economies vulnerable to waves of coronavirus. However, if Australia remains better at controlling it, it should fare relatively better.

Second – tensions between Australia and China could continue to escalate. So far only a small proportion of exports to China amounting to less than 0.5% of GDP are at risk but if it were to affect iron ore the impact would be greater. A Biden Presidency with a focus on diplomatic solutions to issues with China could provide an off ramp for Australia though.

Third – inflation and bond yields could rise. Initially this would be a good problem as higher inflation would help boost share market earnings. But if bond yields rose too fast it would be a problem for shares and other assets.

Fourth – fiscal support could be withdrawn too quickly. But the Government has shown sensitivity to this & keeps extending it.

Fifth – many fret that the ban on international travel means Australia can’t recover. But this is not really true. The bulk of the 7.3% hit to the economy in the first half came via the shutdowns and impact on confidence with the net impact of the travel ban on tourism & education maybe accounting for a 1% hit to GDP at most. So, while the travel ban will prevent a full recovery if it remains, most economic activity can return. The absence of immigration will slow Australia’s long-term growth rate by around 1% pa if it’s sustained and will weigh on the property and construction sector, but it won’t prevent economic recovery.