The table below provides details of the movement in average investment returns from various asset classes for the period up to 30 April 2021.

Economic recovery in April continued its upward trajectory in the majority of developed markets, positively impacted by unprecedented global fiscal stimulus and an accelerated vaccine rollout. The IMF revised its global growth forecast to 6% in 2021, and 4.4% in 2022. Markets are also benefiting from strong earnings growth in an ongoing low interest rate environment, driving positive equity returns. 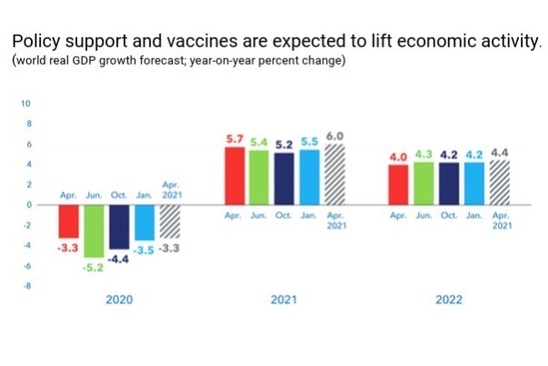 However, recovery has been uneven across countries, with many emerging countries struggling with the low reach of vaccinations and the adverse impacts of re-opening too quickly.

In the US, inflation fears put pressure on markets driven by significant government stimulus spending boosting growth as supply limits driven by the COVID slowdown. The government also unveiled a new American Families Plan which involves up to $2 trillion in spending in areas such as childcare and education. The market dipped temporarily as shareholders learned that this additional stimulus could be funded by tax hikes and a doubling of CGT to high income earners.

Economic recovery in Europe has gained momentum, with April’s confidence measure rising more than anticipated despite the Eurozone economy contracting by 6% in Q1 2021. The activity tracker measure rose month-on-month, but still has a long way to go to reach pre-COVID levels. In the UK, retail sales were up 4.8% in the month, and both the manufacturing and services PMIs came in above 60, signalling economic expansion.

In Australia, the economy continued its recovery, with consumer confidence now reaching an 11-year high which flowed through to retail sales which jumped 1.4%, double some forecasts. Economists now expect consumer spending will start to expand towards services and experiences. The end of JobKeeper has shown little negative impact, as unemployment rates continued to fall to 5.6% and ANZ job data shows that job ads rose 4.7% in April. Despite the strong economic activity, core inflation came in at a benign 1.1% for the year and 0.3% in the March quarter, lower than economist predictions. The RBA has stated that it will maintain Cash rates at 0.1% p.a. until inflation rates reach the 2 – 3% band. 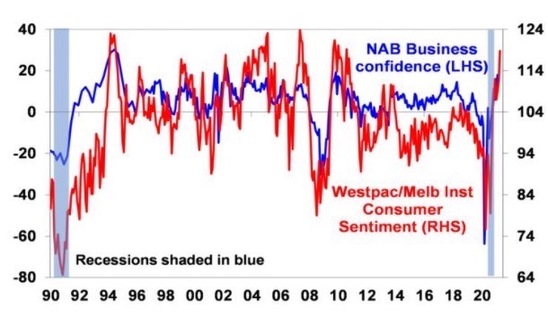 Following the RBA’s decision to hold monetary policy at 0.1% in April, they have been monitoring the property market due to some concerns around lax lending standards. So far, debt and credit growth are both stable and lending standards remain robust. Globally, Central Banks in developed markets are synonymous on maintaining quantitative easing, with the exceptions of the Bank of Canada and Bank of England who have begun to gradually taper their monetary policies as a “reflection of the progress made in economic recovery”.

The global climate crisis reached headlines last month as world leaders pledged to reduce emissions and promote clean technology. In Australia, net zero emissions by 2050 has become the goal for many industries.

It was a strong month for the markets, with the Australian market (+3.5%) posting positive gains as investors digested results from the March quarter reporting season. Info Tech stocks (+9.7%) surged in April, with Buy Now Pay Later stocks reporting strong numbers. Afterpay expanded globally into France, Spain and Italy, while accelerating growth in its US and UK segments. Financials (+3.1%) continue to climb due to favourable lending conditions and writeback of provisions made during COVID, with NAB reporting a 94% increase in cash earnings in H1 with Westpac and ANZ also reported loan book and profit growth. In the materials sector, earnings are buoyant and continue to increase, contributing to a +6.8% return in April. Resources (+5.38%) performed well overall, but Energy (-4.89%) slumped as Whitehaven Coal cut annual coal output and Beach Energy reported oilfield depletion.

International equity markets (4.1%) rose on a currency hedged basis, recording strong gains and continuing its momentum from the last few months. This was led by the US (+5.3%), UK (+4.3%) and Europe (+2.1%). The US market saw rallies in various sectors, supported by ongoing upgrades for economic growth. The technology sector benefitted, in particular, from bond yields coming off recent highs. In the US, March quarterly earnings reporting season was strong, with earnings for the quarter rising 42% YOY, and 87% of S&P 500 companies beating expectations. In resources, copper and iron ore prices both soared to reach decade highs due to demand from China and the US and reduced supply from Brazil. Lumber also saw a tripling in price since June 2020, bumping up the price of new home constructions. In other developed markets, we saw the Japan TOPIX Index fall by -2.8% during the month as infections increased, just after their state of emergency was lifted in February.

US earnings growth and beats 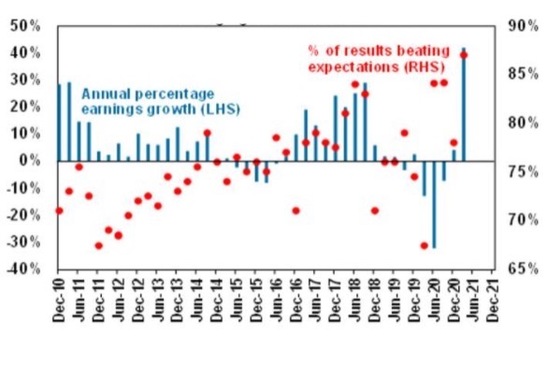 Emerging markets continued to struggle as Brazil and India become the new epicentres of the pandemic, despite this the MSCI EM returned +2.5% over the month driven by strong commodity prices and the weaker $US.

Australian fixed interest returns (+0.6%) improved as the Australian 10-year bond rate decreased by 13bps to 1.7%, as the RBA assured Cash rates will not rise until 2024. In the US, 10-year Treasury Bond yields also declined to 1.63% off a high of 1.77% in March. Stability is likely a result of bonds becoming oversold in the rally, and reassurance from the Central Banks to keep rates low until inflation exceeds 2% for some time and labour markets reach full employment. International fixed interest (+0.2%) saw a small gain.

Australian REITs (+3.1%), although being one of the slower recovering asset classes since the 2020 COVID decline, climbed steadily this month. Some sector leaders included logistics and data centres as e-commerce growth accelerates. Global REITs (+5.8%) were the strongest performing asset class in April as US bond rates fell.

Looking forward, investor demand for a hedge against inflation and a search for income may benefit the property sector, but there is still uncertainty around the future of office and retail spaces given the unpredictability of the virus.