Five reasons why this downturn and subsequent recovery are different

– and where are we now in the Australian recovery?

– This economic downturn and recovery differs from those of the past in that: the downturn was driven by a government shutdown; fiscal and monetary support has been faster and bigger; forced asset sales have been headed off; it’s dependent on containing coronavirus; and it’s seeing more rapid structural change.

– As a result, we have been seeing almost “deep V” downturns and initial rebounds but the subsequent part of the recovery will be bumpier and slower.

– Australia’s recovery is likely to pick up pace again with the reopening of Victoria and should benefit from better control of the virus, better stimulus and the faster recovery in our major trading partners.

From the get-go back in March, as coronavirus lockdowns hit, there has been much debate about what this recession would be like: how deep and long would it be? Was it going to be a recession like those in decades past or more like the Great Depression of the 1930s? Would it look like a V, a U, a W or an L? Or even a K, square root or a swoosh? These questions gained added currency when actual data showed a bigger hit to economies than what was seen at the end of WW2 or the Great Depression and then confusion reigned as much data showed very steep rebounds. But one thing that seemed clear at the start was that it would be very different to past downturns and this is now even more apparent.

Five reasons why this time is a bit different

There are basically five reasons why this downturn and subsequent recovery is different to those of the past:

GDP over year to June qtr v Deaths per million 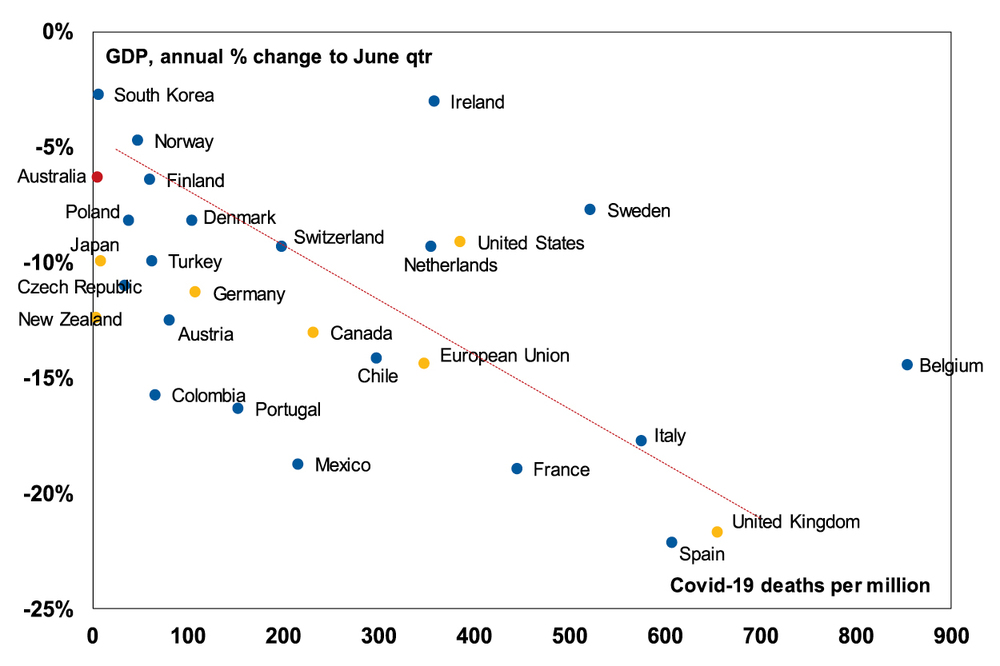 The outworking of all this is likely to be:

The Australian recession and recovery

This pattern looks to have been what we have seen so far globally with very sharp falls in GDP in the first half followed by a strong rebound in the September quarter (with GDP data for the US and Europe to be released later this week likely to show an 8% or so rebound), followed by a more uncertain and gradual recovery going forward – particularly as the resurgence of the virus leads to tightening restrictions in Europe (as we are now seeing in France and Germany) and possibly the US. This can be seen in our projections for the level of real global GDP in the next chart. In particular, global GDP will take years to get back to its pre-coronavirus level which means a long period of spare capacity and low inflation/low interest rates. 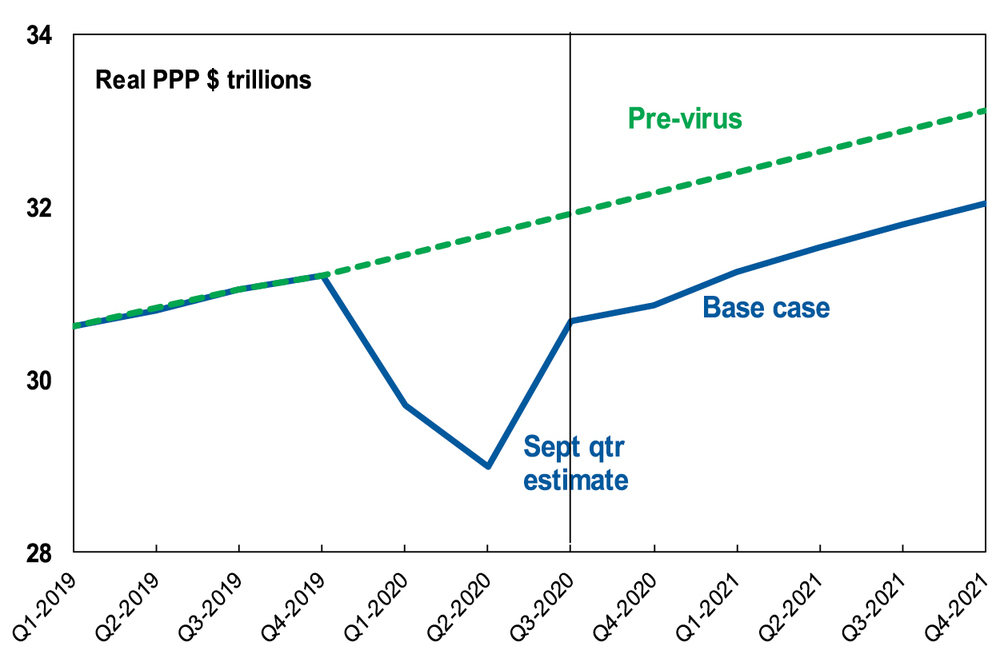 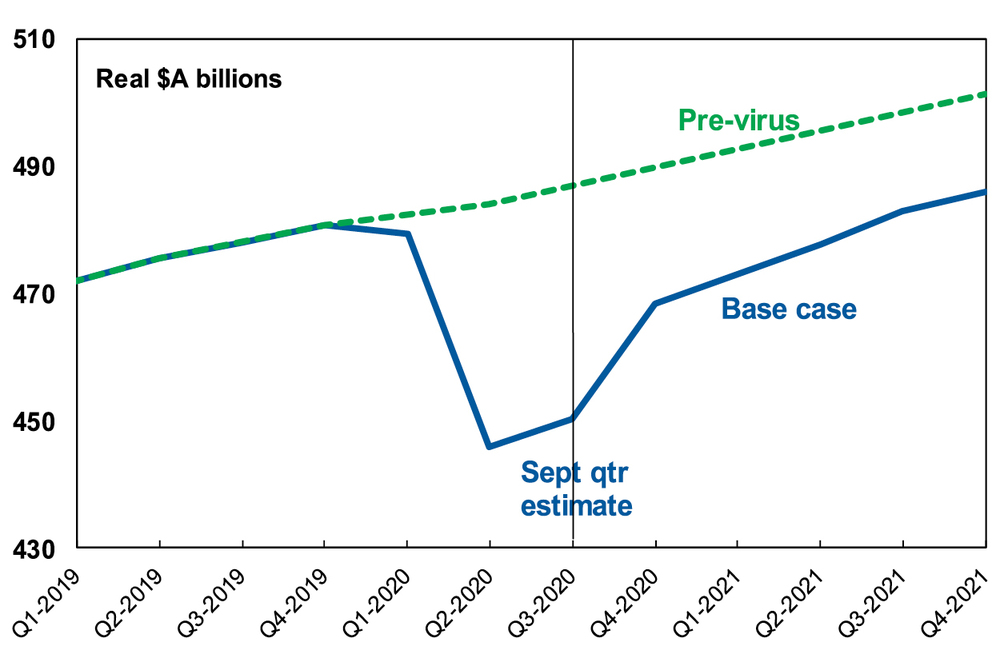 Because most traditional economic data is infrequent, we have constructed Economic Activity Trackers for the US and Australia which track weekly data releases for things like traffic, direction requests from phones, confidence and spending. This clearly shows the initial hard decline in the economy into mid-April, followed by a strong bounce into July on reopening. The recovery then faltered a bit and now seems to be getting back on track with Victoria reopening. 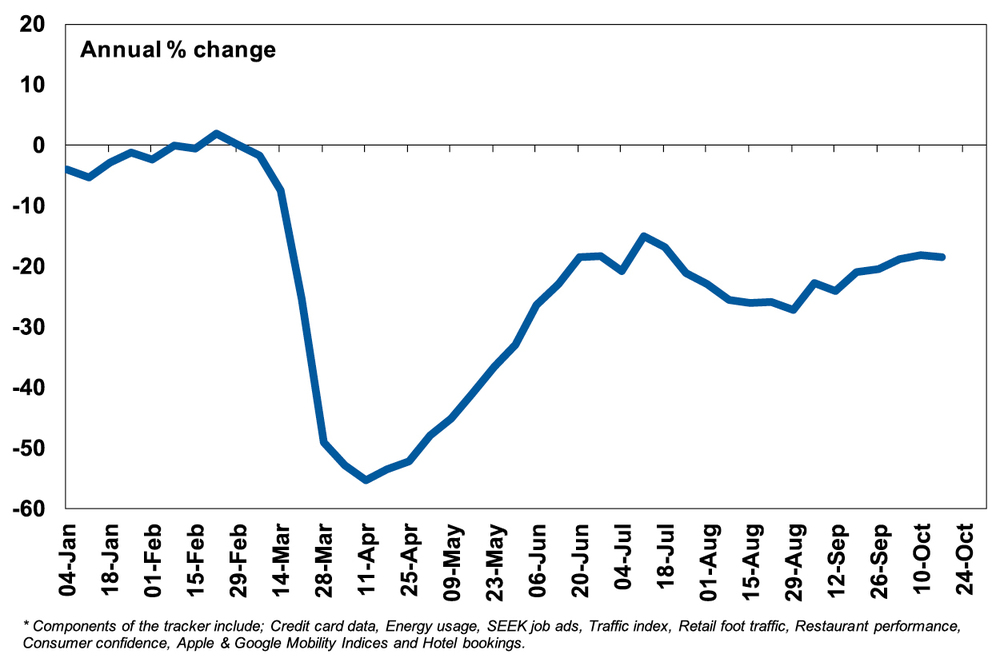 A sharp hit followed by an initial “deep V” rebound can also be seen in Australian employment, which has now recovered about half the job losses seen in April and May. 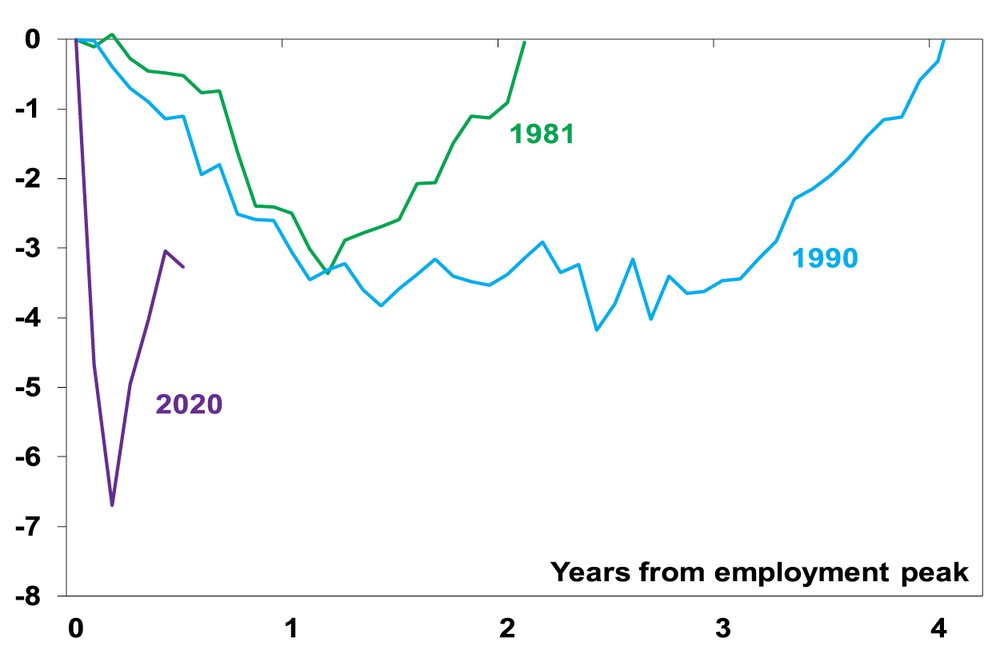 Both our Australian Economic Activity Tracker and employment have seen a sharp rebound but remain a long way below pre-coronavirus levels. In terms of the jobs market, this is reflected in “effective unemployment” (ie, adjusting for JobKeeper and reduced participation) of 9.6% and underemployment of 11.4%. So, while Australia has seen some “recovery,” we have a long way go yet to say that we have “recovered”. Our assessment is that the recovery will continue but beyond a December quarter bounce fuelled by reopening, this will be more gradual and bumpy for the reasons noted earlier as some jobs take longer to recover and some won’t come back at all due to structural change and so will need to be replaced by new jobs which will take time, as government supports wind down and as the hit to immigration impacts the property market.

Australia has performed far better than many comparable countries in controlling coronavirus, it has seen a stronger economic policy response and its major trading partner in China is well into economic recovery. This along with a bit of luck should result in a stronger, more assured recovery in the Australian economy compared to many other comparable countries which should ultimately benefit Australian assets relative to global assets.

FML Financial Solutions Pty Ltd ACN 148 937 222 trading as Inspired Money is an Authorised Representative of Charter Financial Planning, Australian Financial Services Licensee. If you no longer wish to receive direct marketing from us you may opt out by calling us on the phone number under our contact details. You may still receive direct marketing from AMP as product issuer, bringing to your attention products, offerings or other information that may be relevant to you. If you no longer wish to receive this information you may opt out by contacting AMP on 1300 157 173. This document contains general advice only. You need to consider with your financial planner, your investment objectives, financial situation and your particular needs prior to making any strategy or products decision.