Inflation in the 70s – baby boomer fantasy or nightmare?

Why central banks must focus on getting inflation back down

I grew up in the 1970s and it was fun – Abba, Elvis, Wings, JPY, flares, cool cars, etc. But economically it was a mess. Inflation surged and so did unemployment. And it was bad for investors too. After years of economic pain voters turned to economically rationalist political leaders – like Thatcher, Reagan and Hawke & Keating – to fix it up. Their policies to boost productivity ultimately culminating in independent inflation targeting central banks along with the help of globalisation, more competitive workforces and the IT revolution got inflation under control from the 1980s and 1990s. So much so that there was even talk of “the death of inflation”. The experience of the last year when inflation has surged tells us that unlike the parrot in Monty Python it really wasn’t dead but just resting. Initially its rise was seen as “transitory”. And many are still questioning why central banks need to do much – what will RBA rate hikes do to bring high lettuce prices back down? – and that central bank worries about wages growth picking up causing a wage price spiral are just a baby boomer fantasy. So just sit it out. The 1970s experience suggests otherwise.

Many associated the inflation of the 1970s with the oil shocks of 1973 and 1979 but it actually got underway before that. 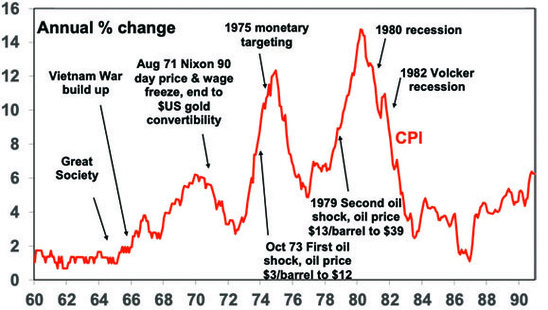 From around the mid-1960s inflation started moving up, notably in the US and then later in Australia reflecting a combination of:

From 1965 to 1969 US inflation rose from below 2% to above 6%. US monetary policy was tightened driving a recession in 1969-70 which saw inflation dip. Monetary policy was then eased but before inflation came under control so it bottomed well above 1960’s lows and started up again forcing a return to monetary tightening. In 1973 inflation had already increased to 8% before the OPEC shock. The same whipsaw happened after another recession in 1974-75 which saw inflation bottom out above its previous high only to take off again. The process only ended with the deep recessions of the early 1980s. 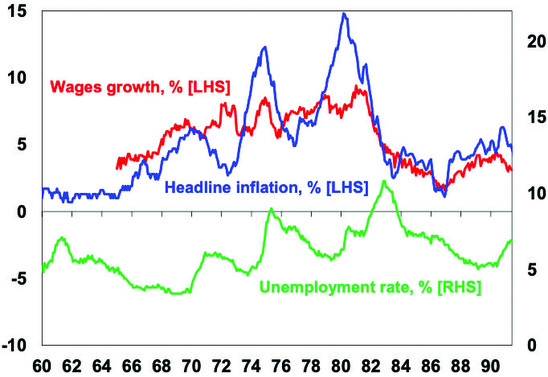 It was pretty much the same story in Australia, although here it started more in the early 1970s and was made worse by 20% plus wages growth and massive fiscal stimulus in 1974. 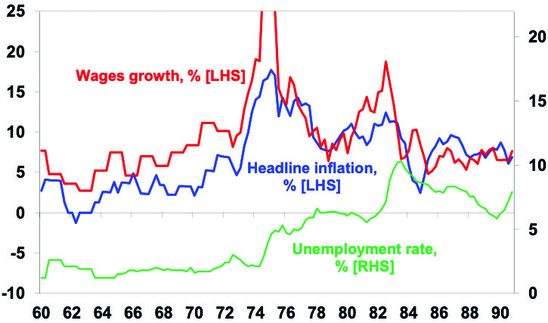 And in Australia, the automatic indexation of wages to inflation from 1975 just helped lock in high inflation (as wages add to costs) with only the 1983 Accord breaking the nexus by trading off wage increases for tax cuts and social benefits.

The end result was a decade of high inflation and high unemployment. The problem was that policy makers were too slow to realise the extent of the inflation problem initially and then were too quick to ease which enabled inflation to quickly pick up again and move higher. The longer inflation persisted the more inflation expectations rose – with wage growth rising – making it harder to get inflation back down.

Why the concern today?

There are several reasons for concern about a return to the sustained high inflation of the 1970s today:

So while central banks can’t do much to boost the supply of lettuces and lower petrol prices they are right to have moved to a more aggressive strategy as it will slow demand and by stressing that they are committed to returning inflation to target will help keep inflation expectations down.

Why high inflation is bad news for investors?

The 1970s experience warns it’s in investors long term interest to get inflation under control even if it involves a bit of short-term pain. For investment markets high inflation is bad as it means:

The first two mean rising bond yields which means capital losses for investors in bonds. This tends to unfold gradually.

All three mean shares tend to trade on lower price to earnings multiples when inflation is high, and real growth assets (like property) generally tend to trade on higher income yields. This was seen in the high inflation 1970s when shares struggled. It means that the boost to earnings (or say rents in the case of property or infrastructure) from inflation tends to be offset by a negative valuation effect as investors demand lower PEs/higher yields. See here for a deeper explanation.

So the bottom line is that a sustained period of high and rising inflation can be a problem for bonds, shares and other growth assets. As can be seen in the next chart, the high inflation 1970s was one of the few decades to see poor real (ie after inflation) returns from bonds and shares.

The 1970s saw poor returns from shares and bonds 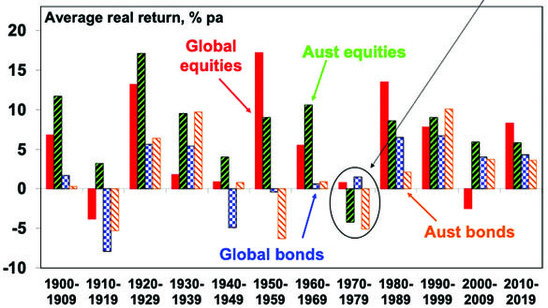 So, it’s in investors’ interest that inflation is kept low and stable.

Reason for optimism a return to the 1970s is unlikely

While many of the structural forces that drove the disinflation of the last few decades are reversing and suggest higher inflation over the decade ahead than seen pre-pandemic, sustained 1970s style high inflation appears unlikely: 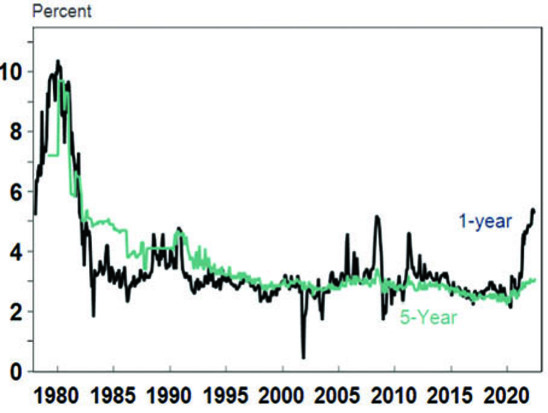 So, while inflation may not go back to pre-pandemic lows and the longer-term tailwind for investment markets from ever lower inflation and interest rates may be behind us, a full-on return to the 1970’s malaise looks unlikely.