RBA cuts rates to just 0.1% and ramps up quantitative easing – but will it work

– The RBA has cut the cash rate to a record low 0.1% & announced a broad-based quantitative easing program.

– While the economic boost is likely to be small compared to that provided by the recent Budget, the further reduction in borrowing costs will support household & corporate finances and housing demand as well as keep the $A lower than would otherwise be the case.

– For investors, it means low interest rates for even longer – with a rate hike unlikely until 2024 at the earliest.

Broad based additional easing from the RBA

As had been well flagged, the RBA announced significant further monetary easing at its November meeting. This entails: 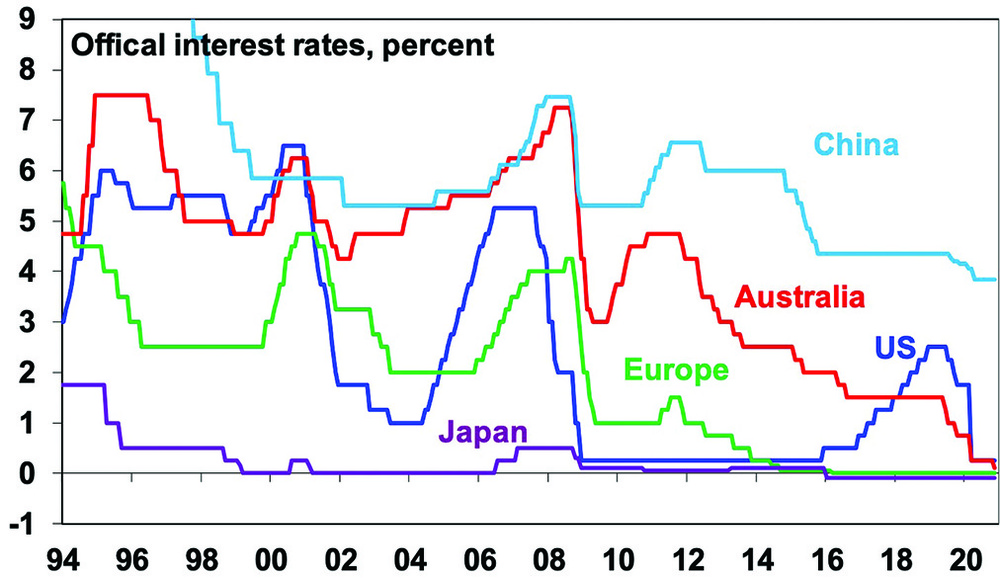 Put simply, the RBA’s economic forecasts show that it does not expect to meet its inflation and employment objectives over the next two years and it sees the recovery as being bumpy and drawn out. It has been undershooting its 2-3 percent inflation objective for the last five years now. 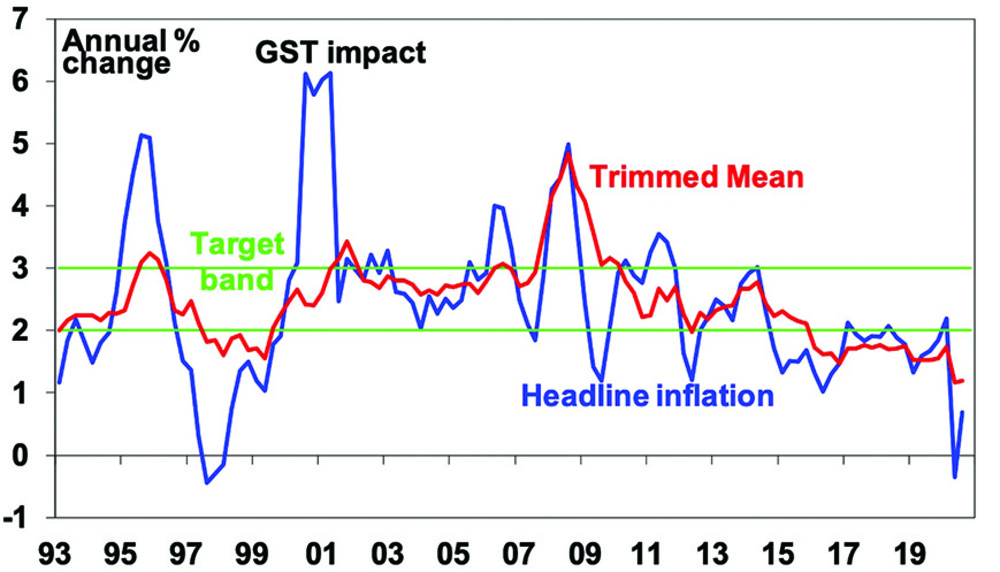 More importantly the coronavirus hit to the economy has taken us further away from full employment and the RBA sees addressing the high rate of unemployment as an “important national priority.” Of course, fiscal policy is likely more powerful in terms of driving actual spending. But the RBA remains committed to do what it can and is under pressure to act when it’s not expecting to meet its objectives. It feels that monetary easing is likely to gain more traction now the economy is reopening and can’t ignore the faster pace of quantitative easing in other major countries. The latter has the effect of pushing up the $A relative to what it otherwise would be which in turn slows the economic recovery.

Why not just lower the inflation target?

Surely low price rises or falling prices are good. So, why not just lower the inflation target. This would be crazy. First, the whole point of having an inflation target is to anchor inflation expectations. If the target is just moved whenever it’s breached, it won’t be taken seriously & there would be no point having it..

Second, statistical measures of inflation tend to overstate actual inflation and targeting too low inflation could mean we are knocked into deflation in an economic downturn.

Fourth, low inflation is synonymous with low wages growth and this contributes to a sense of dissatisfaction in the community.

Finally, it’s not just about below target inflation but also about reducing high levels of unemployment and underemployment.

But will the banks pass on the RBA rate cuts?

Passing all of the 0.15% cut on will mean some downwards pressure on bank profit margins as a significant chunk of deposits are already at or near zero rates – and the banks won’t want to cut those negative. But I think the banks will pass most of it on under pressure from the RBA and Government who have been providing them with a lot of support (including cheap funding which is now 0.15% cheaper) and if they don’t they will face a public backlash. One way around it is to cut their standard variable rates by say 0.1% and then cut their fixed rates by say 0.2%, as the latter only benefits new customers but gains publicity brownie points (made possible by lower funding costs on the back of lower bond yields due to RBA bond buying). This is what happened in March. Three-year fixed rate mortgages are already averaging around a very low 2.35%. 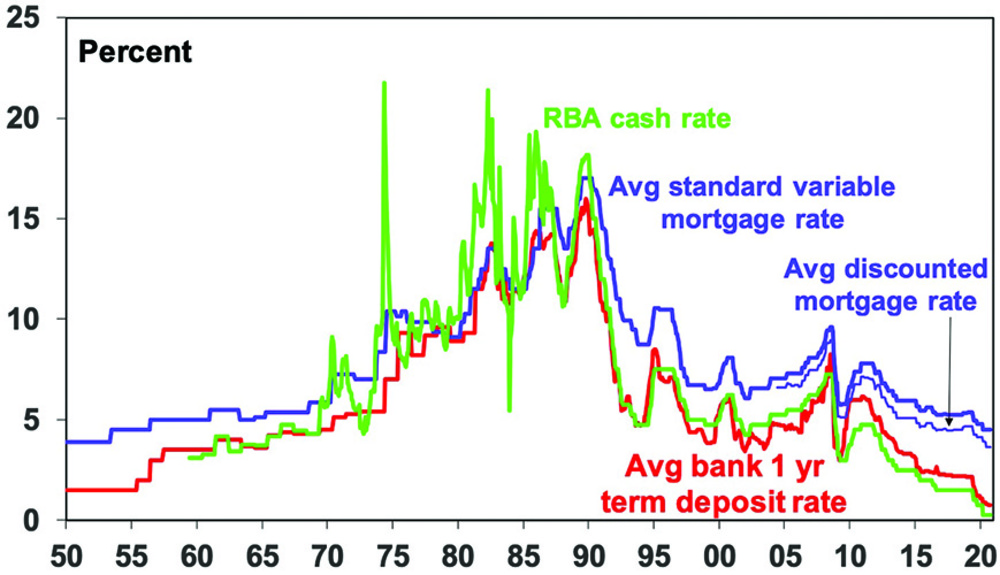 But will the further easing help anyway?

While the further easing announced by the RBA won’t have a huge impact compared to say the boost from the Budget, it will have a positive impact on the economy at the margin. First, even just a 0.1% reduction in mortgage rates will mean roughly a $400 a year reduction in interest costs on a $450,000 mortgage. Note that the level of household debt in Australia is more than double the level of household bank deposits so the household sector is a net beneficiary of lower interest rates. Second, a further reduction in fixed rates will further spur new home demand. Third, further rate cuts and an increase in the supply of Australian dollars on the back of expanded quantitative easing will help keep the $A lower than otherwise which helps exporters and companies competing with imports. Finally, extra RBA bond buying will make it easier for the Government to run its large budget deficit.

What about the risk of financial instability?

There is certainly a risk that the combination of even lower mortgage rates combined with a notable easing in lending standards (with the removal of responsible lending obligations and the First Home Loan Deposit Scheme) will drive household debt levels even higher, posing the risk of increased financial instability in the years ahead, particularly if house prices ultimately correct in the face of substantially lower immigration. Right now though, the RBA is more focused on helping people get jobs and avoiding debt servicing problems.

Will the RBA take rates negative?

This is unlikely as the evidence as to whether they have worked in Europe and Japan is mixed and they confuse people which may depress confidence. As a result, the RBA has regularly said that negative rates are “extraordinarily unlikely” in Australia. That said with central banks in the UK, Canada and NZ considering them, negative rates can’t be ruled out entirely to the extent that if other central banks go down that path, it may put more pressure on the RBA to do so too. As long as the Fed doesn’t go negative though I think it’s unlikely.

Is the RBA now out of bullets?

The RBA has now hit the bottom of the barrel in terms of conventional interest rate cuts, but as other major central banks have shown since the GFC, there is still plenty it can do in terms of ongoing quantitative easing.

There are a number of implications for investors from the latest easing by the RBA. First, ultra-low interest rates will likely be with us for several more years, keeping bank deposit rates unattractive so it’s important for investors in bank deposits to assess alternative options. Second, the low interest rate environment means the chase for yield is likely to continue supporting assets offering relatively high sustainable yields. This is likely to include Australian shares where despite sharp cuts to dividends, the grossed-up for franking credits dividend yield on shares remains far superior to the now even lower yield on bank term deposits. Investors need to consider what is most important – getting a decent income flow from their investment or absolute stability in the capital value of that investment. Of course, the equation will turn less favourable if economic activity deteriorates again. 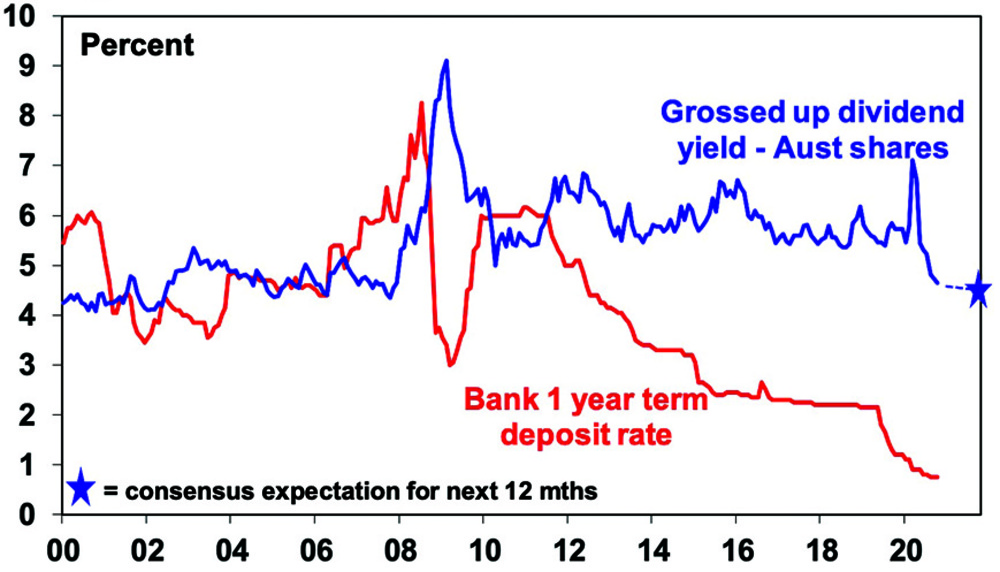 Third, the ongoing decline in mortgage rates along with easing lending standards will help boost house prices but bear in mind that high unemployment and the hit to immigration will likely impact in the year ahead. The housing outlook also varies dramatically between cities & within them given rising demand for outer suburban and regional houses over inner city units.

Finally, lower rates and increased quantitative easing will help keep the $A lower than otherwise but it’s still likely to rise over the year ahead if global recovery continues and this pushes up commodity prices.