The investment outlook – it’s not all that bad!

Here are nine reasons why

– The past financial year has been rather messy for investors with another long worry list, a bear market in most share markets and record low bond yields.

– However, returns for diversified investors were not disastrous and followed several strong years.

– More importantly there are nine reasons for optimism: okay growth, easier for longer monetary policy, rising prospects for easier fiscal policy globally, we may have seen the worst of the commodity bear market, deflation risks are likely receding, the global profit slump may be close to over, share valuations are okay, investors seem to be getting used to a falling Chinese Renminbi and there is still a lot of bearishness around.

– So expect investment returns to remain constrained and volatile but they are likely to be reasonable.

The past few weeks have been messy with Brexit, the Australian election, another terrorist attack in France and an attempted coup in Turkey. In fact, the last 12 months have been – starting with the latest Greek tantrum and China share market plunge a year ago. It’s almost as if someone has listened to Taylor Swift’s song “Shake It Off” and decided to try and shake up investment markets. This has all seen a rough ride in investment markets with most share markets falling into bear market territory at some point over the last year and bond yields plunging to record lows. This note reviews the worry list from the last 12 months, the impact on returns and looks at the outlook going forward.

The past year has seen a long worry list with:

The success of Donald Trump in the US, the Brexit vote & the close election in Australia highlight a growing angst at rising inequality and a loss of support for the economic rationalist policies of globalisation, deregulation and privatisation. While understandable, the resultant populist policy push risks slower long term economic growth and lower investment returns.

The turmoil over the last 12 months has shown up in very messy share markets (with most falling into bear market territory with 20% plus falls from last year’s highs to their lows early this year before a rebound) and a sharp decline in bond yields to record lows. However, unlisted assets like commercial property, infrastructure and listed yield-based plays like real estate investment trusts have done very well. Reflecting the constrained environment, balanced growth superannuation funds saw average returns of around 1-2%. 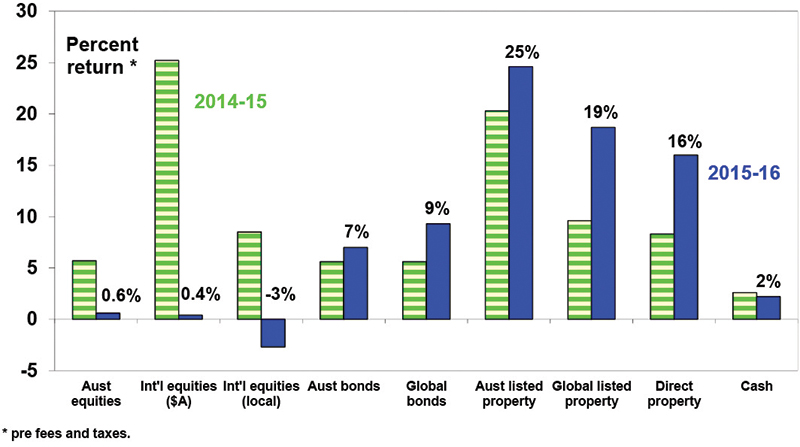 Nine reasons why it’s not all that bad

But while super funds had soft returns over the last year they were not disastrous and moreover they averaged 8-9% over the last three years – which is not bad given how low inflation is. What’s more, while the worry list may seem high that has been the story of the last few years now. For example, 2014-15 saw worries about the end of the US Fed’s quantitative easing program, Ukraine, the IS terror threat, Ebola, deflation, a soft start to 2015 for US growth (we hear that one a lot!), worries about China, soft Eurozone growth and on-going noise about a property crash/ recession in Australia. So nothing new really! More fundamentally there are nine reasons for optimism.

First, global growth is okay – there has been no sign of the much feared global recession. Global business conditions surveys point to ongoing global growth of around 3%. 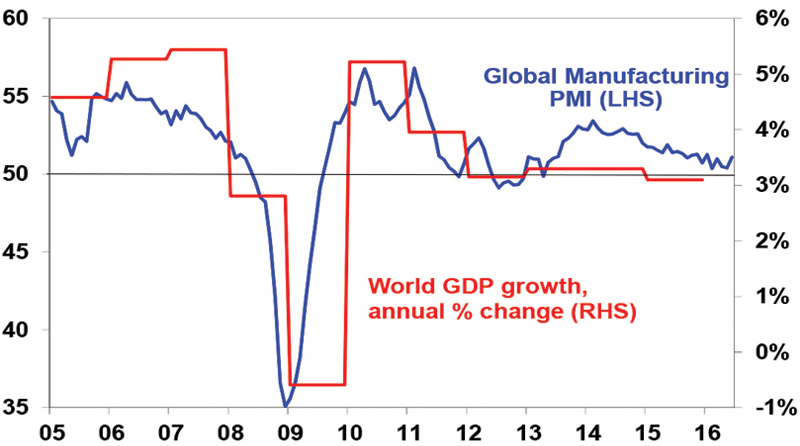 In Australia, growth has in fact been particularly good at around 3%. The economy has rebalanced away from a reliance on mining and it has benefitted from the third and final phase of the mining boom which has seen surging resource export volumes.

Third, while the shift to the left by median voters in Anglo countries resulting in more populist policies is likely to harm long term growth potential, it could actually boost growth in the short term (including under Trump in the US) as it sees a relaxation of fiscal austerity.

Fourth, we may have seen the worst of the commodity bear market. After huge 50% plus falls some commodity markets are moving towards greater balance (notably oil and some metals).

Fifth, deflation risks look to be receding. Oil prices which played a huge role in driving deflation fears look to be trying to bottom and a shift towards more inflationary policies by governments and some central banks are likely to start shifting the risks towards inflation on a 2-5 year view.

Sixth, the profit slump may be close to over. US profits are showing signs of bottoming helped by a stabilisation in the $US and the oil price. Australian profits are likely to rise modestly in the year ahead as the commodity price driven plunge in resource profits runs its course.

Seventh, the latest falls in interest rates and bond yields have further improved the relative attractiveness of shares and may unleash yet another extension of the search for yield.

Eighth, investors have been more relaxed about the latest decline in the Chinese Renminbi – reflecting slowing capital outflows from China, reassurance from Chinese officials and a growing relaxation about fluctuations in the value of the RMB.

Finally, all the talk has been bearish lately – Brexit, Chinese debt, US slowing, messy Australian election – which provides an ideal springboard for better investment returns!

What about the return outlook?

The August-October period can often be rough for shares. But looking through short term uncertainties and given the considerations in the previous section – it’s hard to see the outlook for investment markets differing radically from what we have seen over the last few years albeit stronger than over the last 12 months for shares. Growth is not flash but okay, inflation is low and monetary conditions overall are set to remain easy. For the main asset classes, this has the following implications: 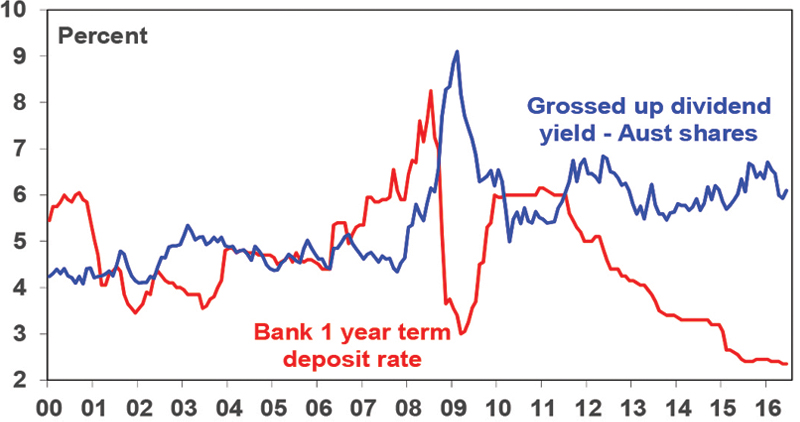 Things to keep an eye on

The key things to keep an eye on over the year ahead are:

The September quarter is historically a rough one for shares and the prospect of a Trump victory in the US and worries about Italian banks may cause some nervousness. But looking beyond near-term uncertainties, the mix of reasonable share valuations, continued albeit constrained global growth, easy monetary conditions and a lack of investor euphoria suggest returns are likely to improve from those seen over the last year.