The Triumph of Trump: What it Means for Investors and Australia

– Donald Trump’s election as President of the United States risks ushering in a period of policy uncertainty which could cause further share market weakness in the short term.

– Australia and Asia generally are particularly exposed to this given the high trade exposure regionally.

– Trump’s victory is a negative for “risk assets” like shares and the $A in the short term – but if he becomes more pragmatic as President, any short term weakness will provide a buying opportunity.

After a seemingly long and difficult campaign Donald Trump has been elected president of the United States with the Republican Party likely retaining control of the House, and probably the Senate, in Congress. Just as we saw with the Brexit vote, the combination of rising inequality, stagnant middle incomes and the disenchantment of white non-college educated males has seen a backlash against the establishment and helped deliver victory for Trump. This note looks at the implications.

Taxation: Trump promises significant personal tax cuts including a cut in the top marginal tax rate to 33% from 39%, a cut in the corporate tax rate to 15% from as high as 39% and the removal of estate tax.

Government spending: Trump wants to reduce non-defence discretionary spending by 1% a year (the “penny plan”), but increase spending on defence and veterans.

Budget deficit: Trump’s policies are likely to lead to a higher budget deficit and public debt.

Regulation: Trump generally wants to reduce industry regulation, which would be good for financials and energy.

Immigration: Trump wants to build a wall with Mexico, deport 11 million illegal immigrants, put a ban on Muslims entering the US and require firms to hire Americans first.

Healthcare: Trump wants to repeal Obamacare and allow the importation of foreign drugs.

Foreign policy: Trump wants to reposition alliances to put “America first” and get allies to pay more, would confront China over the South China Sea and would bomb oil fields under IS control.

A problem for Donald Trump and America is that he will start his Presidency as extremely unpopular – in fact he is the least popular candidate on record and the election campaign has also highlighted a deeply divided America.

Net favourability rating a month prior to the election 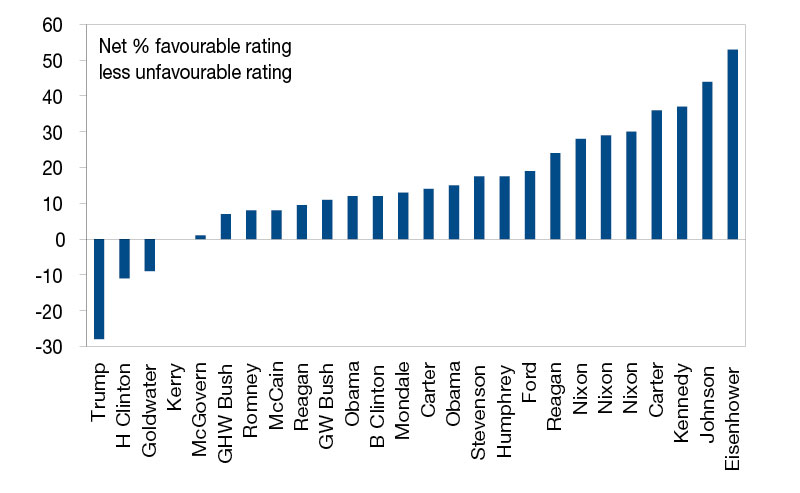 He also faces a difficult time negotiating with his Republican colleagues in Congress given many distanced themselves from him during the election campaign.

Trump’s victory, like the Brexit vote, adds momentum to a backlash against establishment economic policies and specifically a move away from economic rationalist policies in favour of populism and a reversal of globalisation which could be a negative for long term global economic growth. The shift away from globalisation could also add to geopolitical instability (Russian President Putin was a supporter of Brexit and Trump!). More positively though, a greater focus on using fiscal stimulus could help reduce the burden on monetary policy and policies to reduce inequality could help support longer term economic growth.

Some of Trump’s economic policies could provide a boost to the US economy. The Reaganesque combination of big tax cuts and increased defence and infrastructure spending will provide an initial fiscal stimulus and, with reduced regulation, a bit of a supply side boost to the economy. The downside though is that this will blow out the budget deficit and the risk is that his protectionist policies will set off a trade war, and along with much higher consumer prices and immigration cut backs will boost costs. All of which could ultimately mean higher inflation and bond yields and a faster path of Fed rate hikes in the US (apart from any initial delays associated with uncertainty around his policies).

There may also be negative geopolitical and social consequences – tensions with US allies, reduced inflows into US treasuries in return, a more divided America – if Trump follows through with policies on these fronts.

Australia being more dependent on trade than the US (exports are 21% of GDP in Australia against 13% in the US) will be particularly vulnerable if Trump were to set off a global trade war.

The ultimate impact will depend on whether we get Trump the populist (determined to push ahead with his protectionist policies and steam roll Congress) or Trump the pragmatist (who backs down on his more extreme policies, eg. around protectionism) leading to a smoother period for the US and global economies. If we get Trump the pragmatist there is a good chance the US will see a sensible economic stimulus program combined with long needed reforms in areas like corporate tax.

Historically since 1927 US total share returns have been weakest when Republicans controlled the presidency and Congress with an average return of 8.9% p.a. 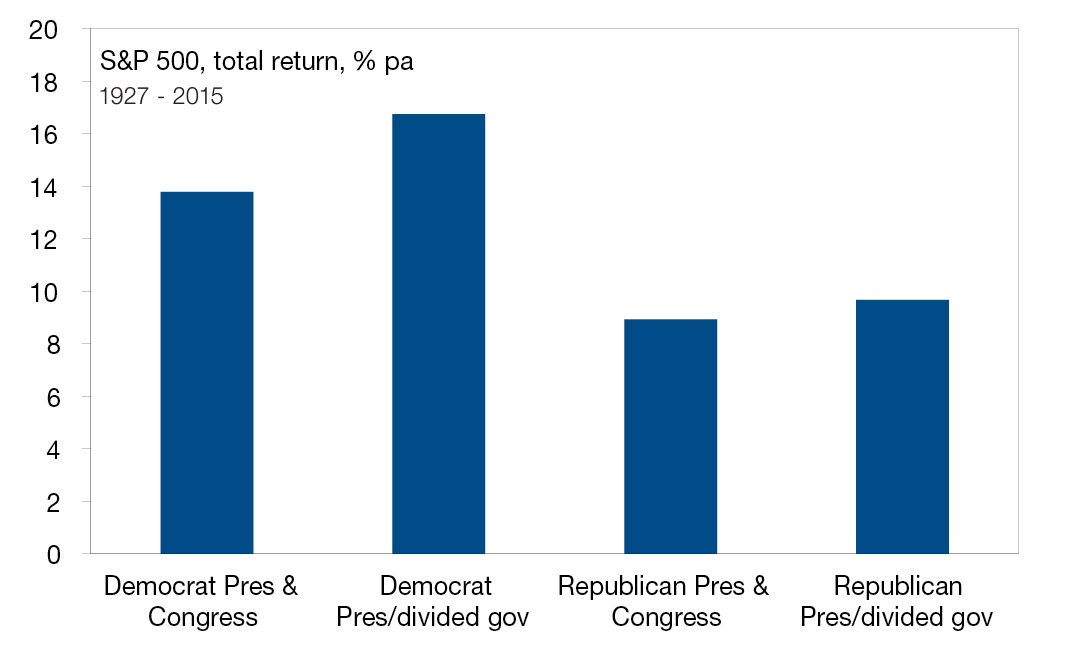 While Trump’s victory will come as a bit of a shock to many, there is a good chance that economic realities and the checks and balances provided by Congress will see his policies become more pragmatic. A good initial guide to this will be what sort of advisers Trump appoints around him. And remember there was much concern a Yes Brexit vote would be a disaster for shares and the global economy. What actually happened was an initial knee jerk sell off but after a few days global markets moved on to focus on other things and shares rallied. So there is a danger in making too much of the US election. It’s also worth noting that recent global growth indicators have been improving – both business conditions PMIs and profit indicators – and this along with continuing ultra-easy global monetary policy provides support for investment markets in the face of short term political uncertainties.

Finally, while the Presidential election is an important political event, investors should remain focused on adhering to their financial objectives, ensuring that their portfolios are well diversified across asset classes and geographies, and continuing to take a long-term view.